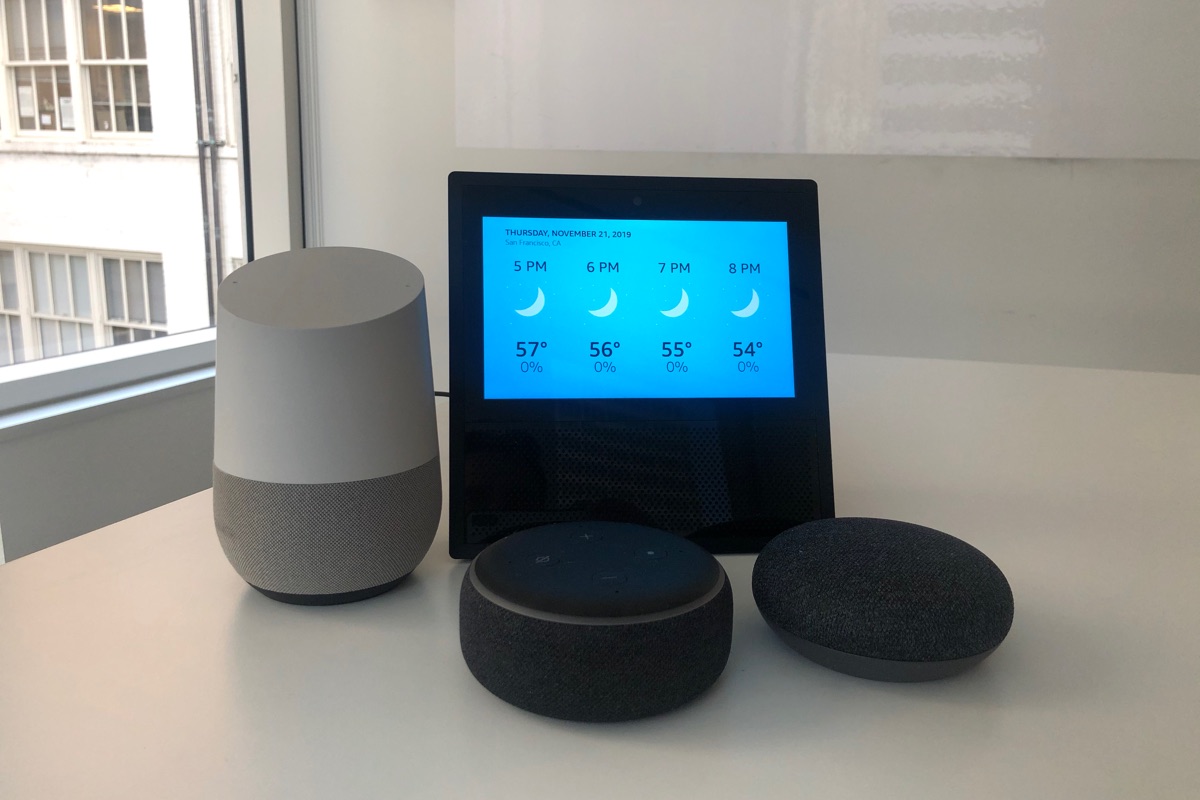 Voice assistants are a hot technology. Alexa and Google Assistant continue to expand reach through integrations into appliances, cars, and more. Enterprises, brands, and startups continue to launch voice assistant experiences for a variety of industries including media, retail, banking, food delivery, CPG, and more.

For the past three years, at Dashbot, we surveyed owners of Alexa and Google Home devices to better understand how they use their devices and what they think of them. 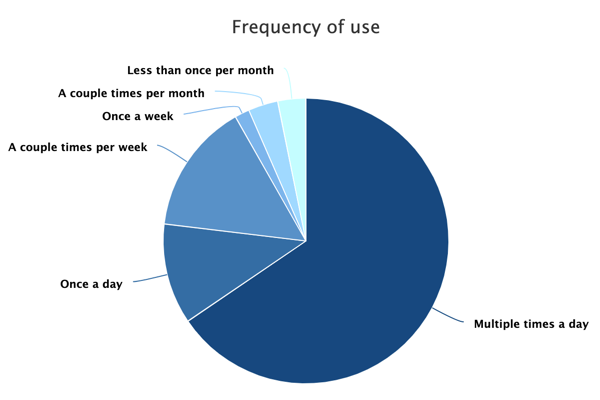 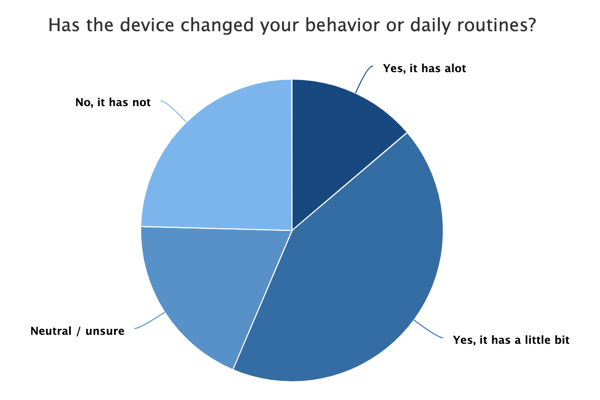 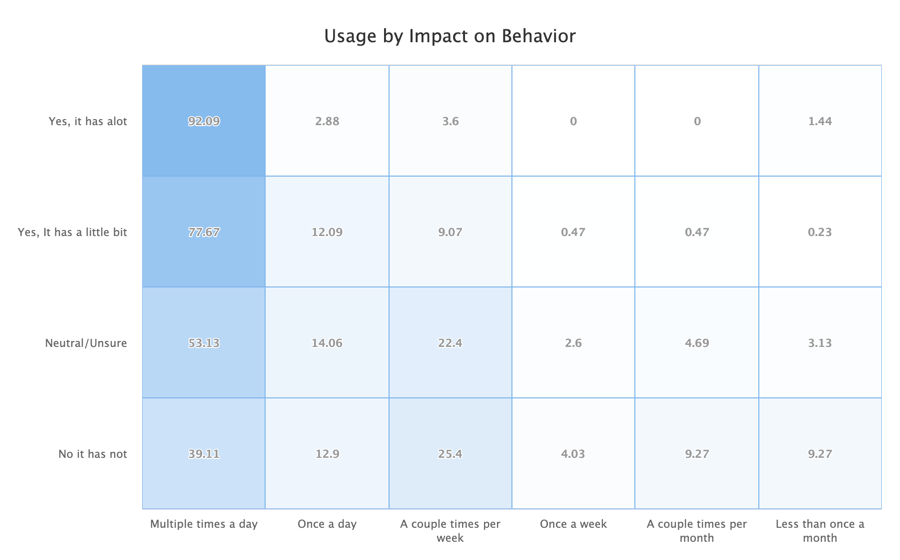 Alexa, where are you?

As usage continues to rise, where are users interacting with these devices? 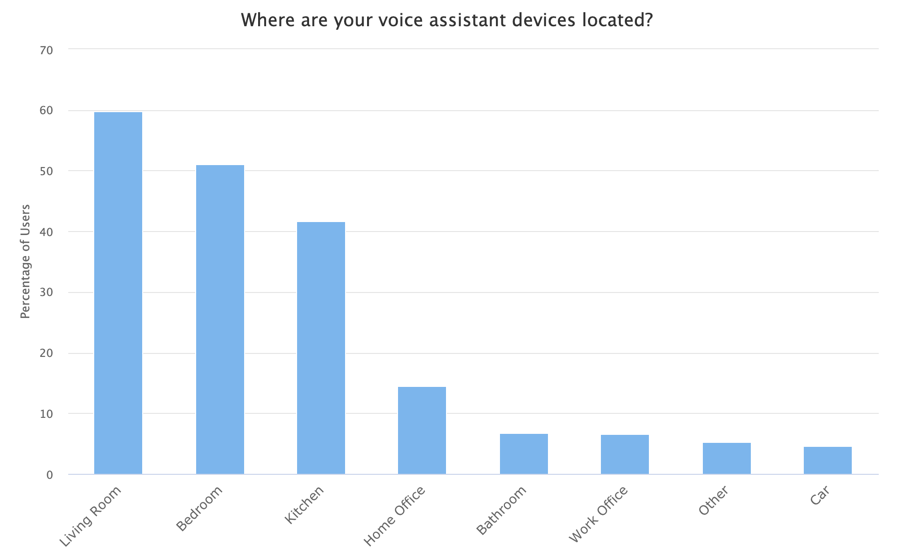 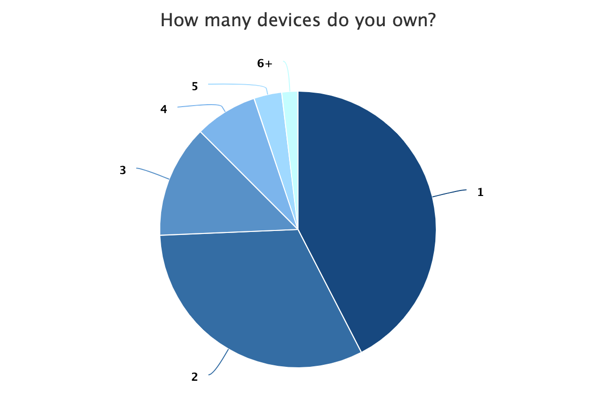 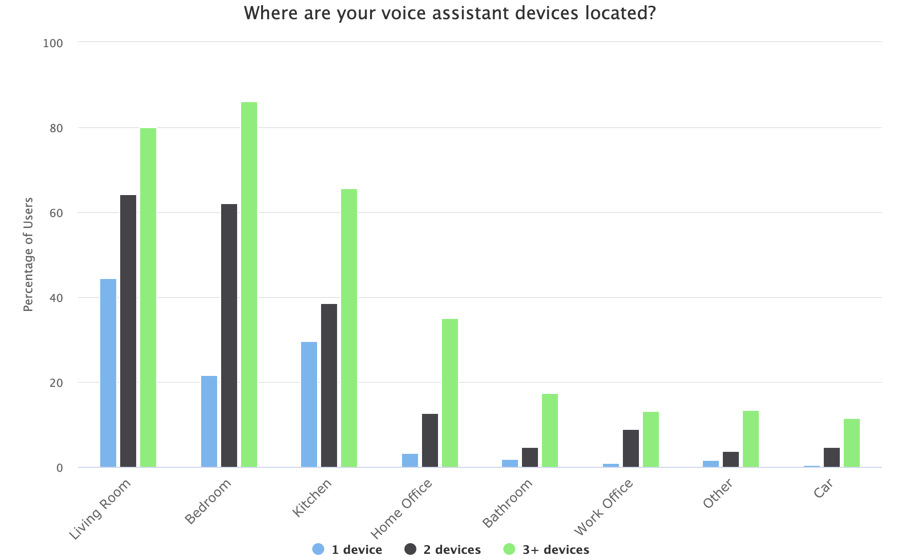 Of those respondents who indicated they have a device in an “other” room not mentioned, the most common rooms were the basement or garage. Funny enough, one person listed the device as still in the box!

Core features are the most commonly used

The core functionality of the device still tend to be the most common features used. Respondents use the devices for music, weather, and general information the most, whereas shopping, playing games, or using a specific skill tend to be less common. 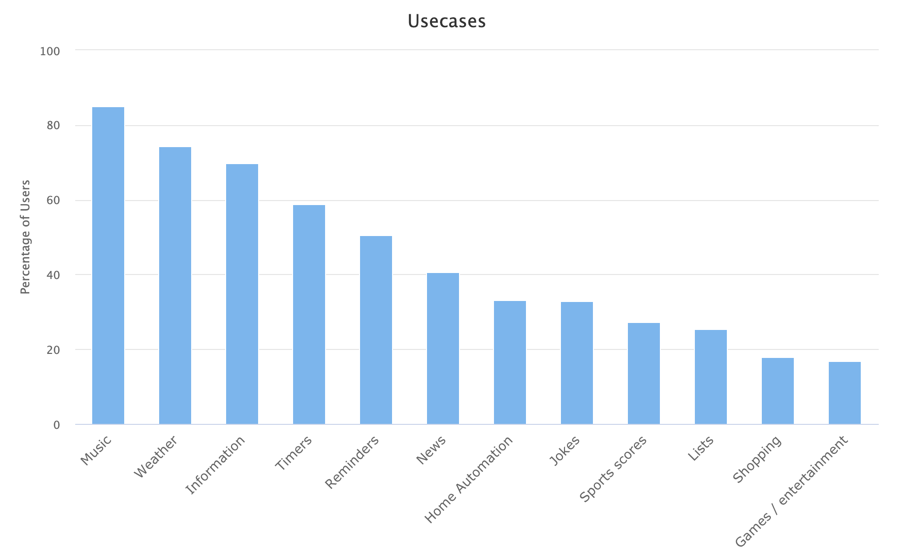 More than 85% of respondents use their devices to listen to music, 74% to check the weather, and nearly 70% to get information.

Listening to music is not only the most popular feature, but also one of the more frequently used. Nearly 43% listen to music multiple times a day and another 20% do so at least once a day. Checking the weather on the other hand is more of a once-a-day activity at 46% versus 24% who do so multiple times a day.

A less common, but frequently used feature is home automation. While only a third use this feature, of those who do, over 73% do so multiple times a day. It makes sense if people are using the device to control lights and other areas of the house. 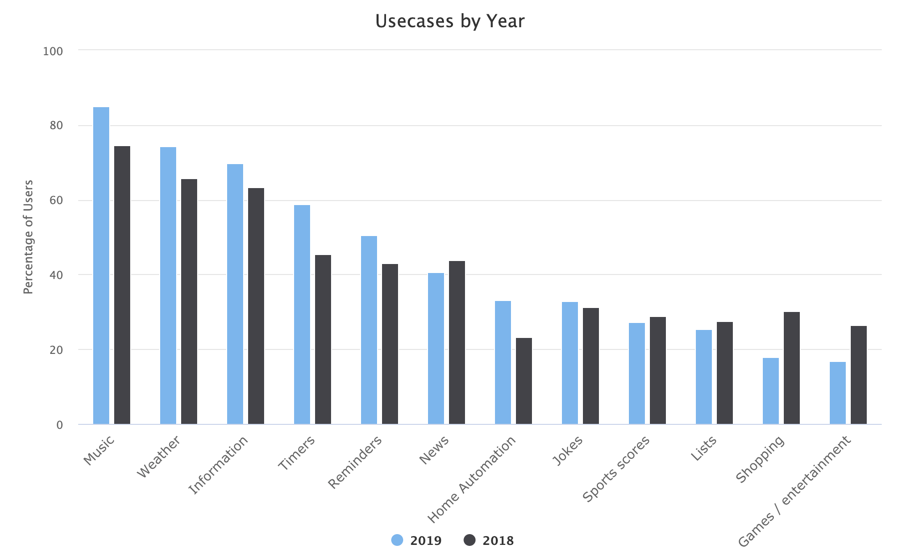 If we look at usage based on gender, the top features are fairly similar. The most common use cases for both men and women are music, weather, general information, timers, and reminders. 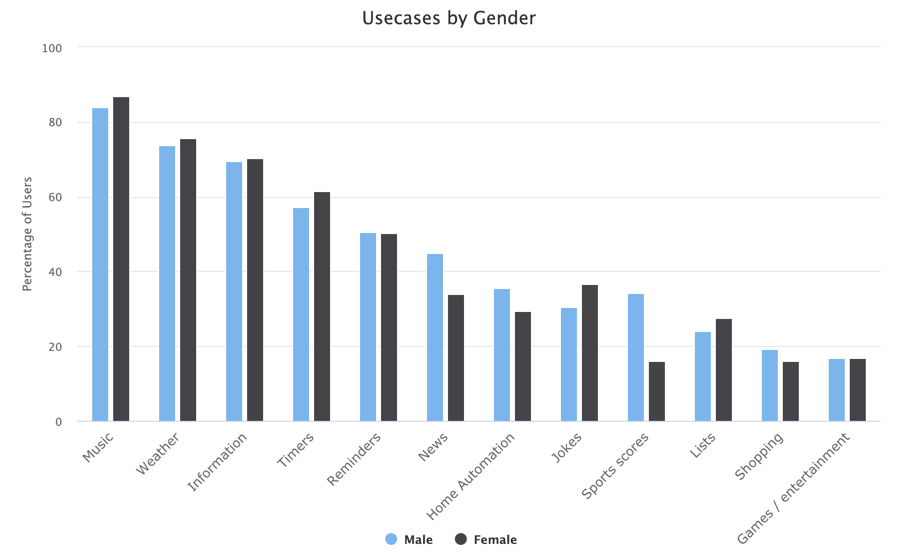 Making purchases has dropped off

One area we dived deeper into last year was making purchases through the device. While we were excited by the positive signals, it appears the behavior has dropped off. 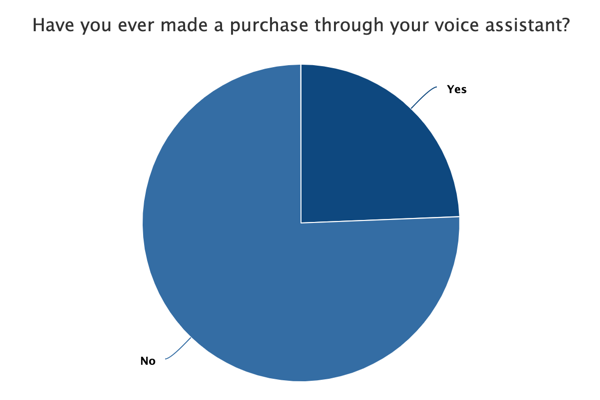 This year only 24% of respondents have made a purchase through their device compared to 43% last year. There could be a variety of reasons why – whether it is the user experience, the number of commerce options, a different audience segment, or perhaps something else. 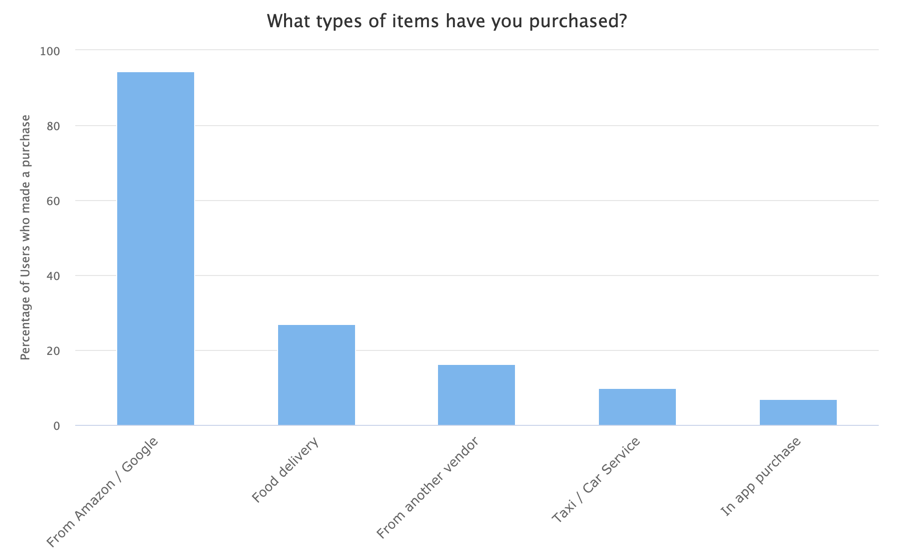 Discovery of third party voice apps is still a challenge

As mentioned earlier, respondents primarily use their devices for the core native functionality. Only 13.5% of respondents use the device for third party skills. However, those who do, tend to use them frequently with 40% doing so multiple times a day and 22% once a day. 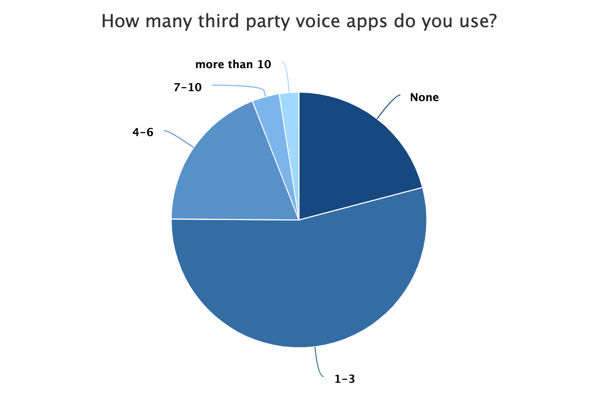 The issue appears to be discovery and user acquisition. As we mentioned in previous reports, some users do not even know what the third party voice apps are called.

Both Alexa and Google have taken steps to increase discovery, including by enabling developers to specify additional Intents their voice apps can handle. Alexa does this with their CanFulfillIntentRequest and Google does it with their Implicit Invocations. If a user asks the device for something without a specific voice app referenced, the platform can use this information to see if an existing voice app can handle the Intent and direct the user to the appropriate app. 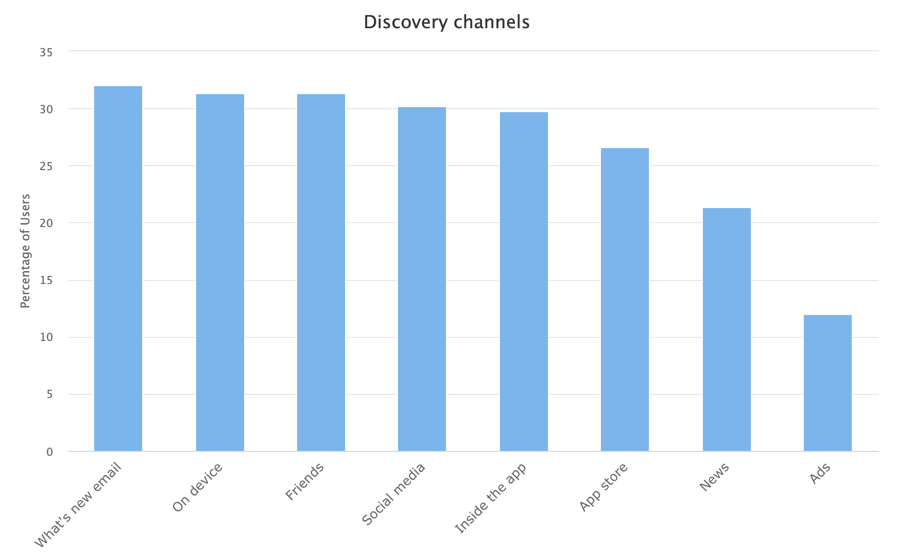 Respondents continue to discover new voice apps through their friends and social media as well.

Ads currently do not appear to be as effective as only 12% of respondents discover new voice apps through this channel.

Hello, is anyone else listening? 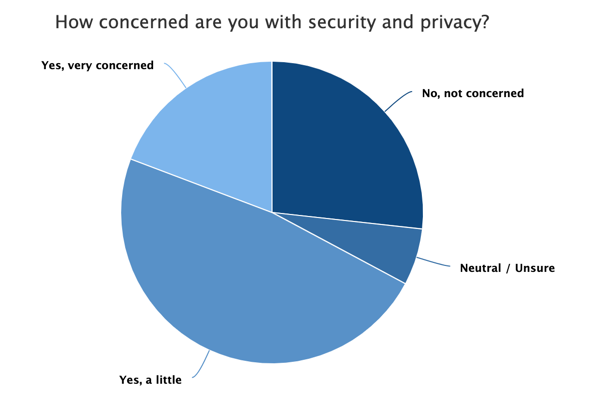 Users continue to be quite satisfied with their devices.

We asked respondents how satisfied they are with the device’s ability to understand, the responses, and the overall experience.

In regards to the device’s ability to understand, 79% of respondents were satisfied to some degree, with 32.5% very satisfied. Only 11.5% were either somewhat or very unsatisfied.

Similarly, in regards the the device’s responses, nearly 80% of respondents were satisfied, with 31.7% very satisfied. Only 11% were either somewhat or very unsatisfied.

Overall, 82% of respondents were satisfied with the device, with 42% very satisfied. Only 9% were either somewhat or very unsatisfied.

When asked to give the device an overall rating on a one to five star scale, respondents averaged about 4.2 stars. Those respondents who find the devices to be very behavior changing, rate them even higher at 4.7 stars.

We also asked respondents if anything surprised them about the devices. In general, users are quite impressed by how much the devices can do, how “smart” and accurate they are, and how easy they are to use.

Users continue to be happy with their Alexa and Google Home devices. Frequency of use continues to rise. Users tend to have multiple devices in their homes. Users are still quite satisfied with the device’s abilities to understand and respond, and recommend them highly.

While voice assistants are hot, the space is still fairly early. There are opportunities for improving user acquisition and discovery, as well as increasing monetization opportunities for brands and developers.

As the device capabilities continue to get better and adoption grows, we are excited to see what the future holds.

Dashbot is an analytics platform for conversational interfaces that enables enterprises to increase engagement, satisfaction, and conversion through actionable insights and tools.

We also have tools to take action on the data, like our Live Person Take Over of chat sessions and push notifications for re-engagement.